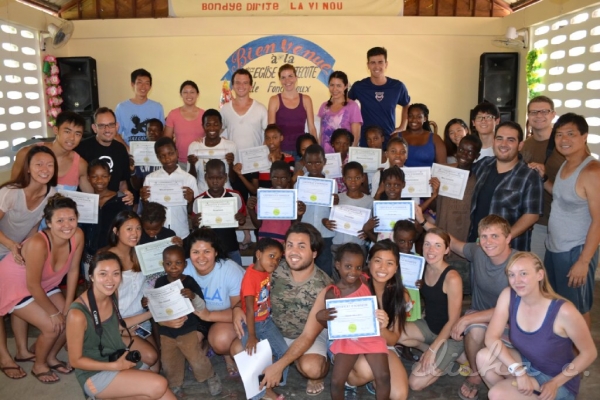 This summer, a team of 25 volunteers traveled to Fond Doux, Haiti to advance the lives of many people living in an unknown part of the world. In the midst of an eventful two-weeks, we took time out to celebrate the 40+ sponsored students who now have the possibility of going to school this year! This is Elisha C.’s first Scholarship Awards Ceremony!

“Do you believe you can fly?” asked our team leader, Winston Bui.

What a perfect glimpse of their innocent yet potential-filled lives! For the first time, we brought in the little kids to celebrate their chance to go to school this upcoming year. We have Lia, a little girl able to go to school for the first time at age 7. We have a large family from a single mother (who now has HIV/AIDS) with eight children, six of whom are school-age ranging from age 4 to 16. When I met them two years ago, none of them attended school – and two years later, I’m proud to say we have enrolled all six children into school! Our team was shouting out each of their names and cheering on every single one of their precious lives as they walked across the stage to receive their certificates of honor! Research shows that pre-school to 3rd grade are the most crucial years of education that will set the course for the rest of a child’s life. For only $80 a year, we can take care of the tuition of their early education and change the course of their lives! It was a bittersweet reminder that as we are celebrating these children on stage, there are many more waiting outside hoping to get called in. This is why we must continue our work. Their lives depend on it.

The second day we brought in the young adults, who can now go to university because of our sponsorship program. Just watching them all sit in front of the room, I was taken back by the tremendous potential right in front of us. These are the future leaders of Haiti. And we get to empower them and invest in their lives so they can make a difference in the lives of others. Our team shared some powerful words and planted deep seeds in their souls. I watched as they noded and soaked in the encouragement and challenges to be socially responsible for their community. They recognize that our act of helping them in their school – which is changing the course of their lives – means they are now responsible to help uplift others. We have created a ripple effect. These young people were fired up from this ceremony to never give up no matter how hard the journey, because they each have a purpose and a calling.

Many thanked me later and told me how special that ceremony was for them. One particular young man, who is studying to be an English teacher, pulled me aside. I was expecting him to ask for something. He started explaining that he has an exam that Friday and if he passes, he’ll be in second year. And I am still waiting for the “ask.” But to my surprise he simply said, “I just want to say thank you, because you made it possible. You are like my mom.” I was so incredibly touched by his words. Though I am about the same age as him, I’ll gladly be called his mom if I can help him reach his future!

I was overwhelmed with thankfulness for all the help we received from our supporters across the United States, Netherlands, Germany, Belgium and China for making this moment possible for so many of young people. Their sponsors are their miracles this year. We are changing the course of their lives. They will never be the same again. 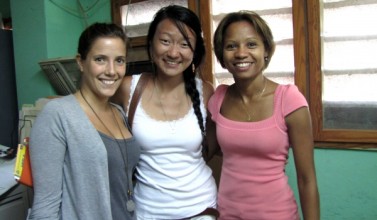 July 2012: Port-au-Prince, Haiti As the plane was getting ready to land in... 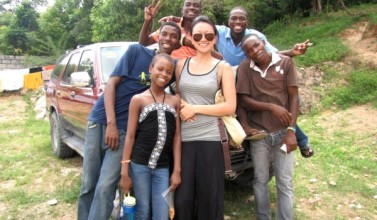 Adventure of a Lifetime

July 2013: Port-au-Prince, Haiti I officially graduated from University of California,... 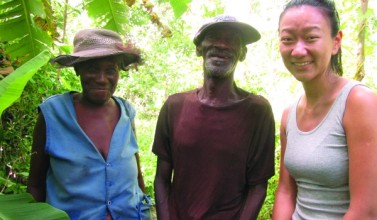 August 2013: Ranquitte, Haiti Within 42 hours of returning to Los Angeles from Shanghai,... 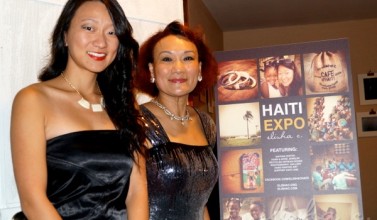 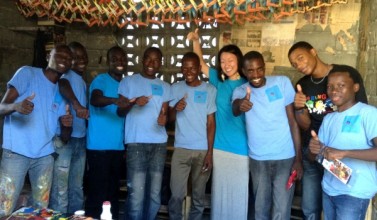 December 2013: Cap Haitien, Haiti I was so impressed with my first time visit to Cap...

March 2014: Port-au-Prince, Haiti   We were welcomed into Haiti at the PAP Airport...